I saw a Martha show the other day called, "The Yoga Show."  I have heard her mention Yoga many times in the past.  Her website contains numerous articles and videos about yoga.  She practices it regularly.

I have very little experience with yoga.  I tried it a little bit a few times over the years.  I find the practice very interesting.  Yoga, according to Wikipedia, has roots dating back as far as 3300 B.C.E.  Um, that's a REALLY long time ago.  The fact that it has been around for so long is interesting enough, but the proposed benefits are varied and astounding.  I know many people who practice yoga and extol it's virtues.

I have spent most of my life seeking healthy habits, balance, fitness, peace...  Yoga appears to be a path by which many people achieve these goals and more.  So, with Martha's encouragement, and a little research as to what DVDs and video tapes were available at my local library, I tried yoga again.  I tried, on my own late last night, some poses that were on Martha's website.  I discovered how truly stiff and tight my muscles are.  And also got confirmation on my lack of abdominal and upper body strength.  I knew these truths already, but have been in denial as to the extent of their depth.  It was good to get a very basic refresher on some common poses, but it was just the form, and not a flowing workout.

Someone I know, who is a regular yoga practitioner, mentioned a book she is reading and working with called, 40 Days to Personal Revolution, by Baron Baptiste.  Baptiste is a well known yoga instructor, and founder of the Baptiste Power Vinyasa Yoga Institute.  I had heard of him before and there was a video of his at the library called "Transform Your Life."  The video has documentary style footage of a group of 42 people from all over the country as they experience a seven day yoga retreat with Baptiste instructing them in workouts, meditation, spirituality and nutrition.  That part was a good introduction for me.  At the end there is a guided workout.  I really enjoyed it!  It was not too difficult and moved quickly.  I was engaging and stretching my muscles.  I felt warm and peaceful.  There were a couple of poses that were tough due to my lack of experience, and a couple that were tough due to my lack of muscle strength.  **coughcoughwimpyabscoughcough**   I felt good after finishing, and look forward to doing it again soon!  I also look forward to trying other forms of yoga and finding what I like best.

I was drawn to another video entitled, "Transform Yourself with Jivamukti Yoga."  The look of the cover itself was attractive to me so I read the description on the back.  It said, "In just an hour a day, this Jivamukti Yoga practice will help you create a new foundation for a happier, healthier life.  The practice is fast and flowing, set to music played on traditional instruments.  The instruction is thorough and inspirational.  Once you make Jivamukti Yoga part of your life, you will look different to the world and the world will look different to you."  Sounds good, right?  The people who give the instruction, Sharon Gannon and David Life, have a studio, boutique and vegan cafe in NYC.  I'm going to try that one tomorrow.  Hopefully I can get my daughter to do it with me.  She has expressed an interest in doing yoga with me, so that will make it extra fun.
Posted by Tamara Gladstone at 2:43 PM No comments:

Project #2 (a day late due to unforeseen circumstances) DECOUPAGE! 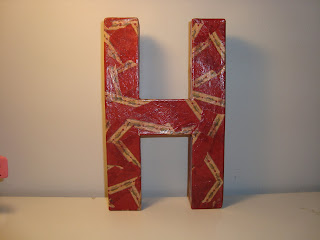 I DID manage to make my project yesterday, but I did NOT manage to blog at that time.  We had a busier than usual and completely exhausting day yesterday.  There are a few things that trump blogging, and snuggling with my loves after a long, trying day and getting much needed sleep are among those things.  Last night I required snuggling and sleeping.  Today, it was 2 woodland hikes, dental work, playdate, homework, American Idol and co-counselling my dear friend for two hours.  I must sleep...
p.s.  This decoupaged letter H will be further embellished when I get the proper information, and will update in the future.  The decoupage technique was inspired by Martha.  It is something I have longed for YEARS to delve into.  It was fun and soothing and ZEN.  I can't wait to add the finishing touches.
.
Posted by Tamara Gladstone at 12:15 AM 1 comment:

I wanted to start with something simple so as not to frighten myself off.  Ha. Ha.  Projects are so rarely easier than they seem like they should be.  I suppose that if I was the kind of person who would just settle for what I had in the house it would have been much simpler.  I chose the project yesterday, found a suitable frame in the basement and printed the clip-art calendar from Martha's website.

I HAD all of the materials required for this project on hand in my home.  However, one of the items was not what I had envisioned.  The project requires two small screw hooks, like teacup hooks.  The ones in our tool box were brass.  I didn't want brass.  I wanted silver.  And they were entirely too big.

I had to go to the grocery store today anyway, so I figured, hey, no big deal.  I'll pick up some silver hooks in the sundries department of the grocery store.  Problem solved.  Yeah.  All they had were brass hooks.  And they came in a package with an assortment of other styles of wall hangers, which I definitely did not need.  Revised plan:  Stop quickly at the home improvement store just a few doors down in the same plaza as the grocery store after paying for the groceries.  Except...  I got to the check out, loaded my loot onto the belt and picked up my purse.  It felt suspiciously light.  Guess why.  That's right.  No wallet.  No wallet means no credit card, debit card or cash on my person.  They were able to suspend my transaction so that I could go home, get my wallet and come back to pay.

At this point, though, my darling daughter would be coming home from school in just a few minutes so I wouldn't have time to stop at the home improvement store.  I went home, got my wallet, got my daughter off the bus, went back to pay for the groceries, brought them home, put them away and then FINALLY headed back to the same dang plaza for the third time today to look for just the right hooks at the home improvement store.  And they didn't have any flippin' silver hooks that were open.  All of the silver ones had closed loops.  There were several different sizes of BRASS or WHITE hooks, but no silver.  So after discussing my options with the friendly store employee, I decided on these teeny little screw in loops that I could pry open with my needle-nose pliers.  Okay.  Enough time wasted.  By the time we got home my daughter needed to finish her homework and I had to finish putting away the last of the groceries.

Finally after dinner, and after fretting about sticking to the promise I had made to myself to start writing today, even if it was junk, I stood at the kitchen counter, pried open the dainty silver loops, fished an old favorite photo from the office desk (I had wanted to print off a more recent photo of my family, but forced myself to be satisfied with one I found, as it takes me about a half an hour to figure out how to print a picture each time I try to do it), trimmed the photo to fit the frame, trimmed the excess paper from aforementioned clip-art calendar, screwed in my precious little silver hooks, punched holes in the calendar to line up with said hooks and voila!  Project complete!

It's not the most wonderful looking thing I've ever done, but it pleases me.  I hung it on the wall right next to my desk.  Every time I look over it makes me smile.

Here is the project on Martha's site:
http://www.marthastewart.com/goodthings/photo-calendar

Here is my finished project:

Posted by Tamara Gladstone at 10:05 PM No comments:

This is going to be quick, but I wanted to get this ball rolling. If I don't start NOW, when will I ever start? My idea is to do at least one recipe, project, craft, organization project or suggestion on the Martha Stewart website each day and blog about it. I will start tomorrow, as today I am under the weather and the floors need to be swept and mopped before my husband, daughter and dog come back from their hike in the snowy woods and dirty it again! :)

My main reasons for doing this are, simply stated:

I will go into more depth about my inspiration for this endeavor and the thoughts that have been racing through my atrophied brain since last night when I saw the movie Julie/ Julia for the first time. I'm SURE there were many people inspired by the movie in such a way. The premise just begged to be emulated. I personally saw a lot of parallels between myself and character of Julie in the movie. There have been many happenings in my life as of late that lead me to this point. I look forward to dissecting it all here and seeing where it all leads me. Onward and upward! Now, about those floors...
Posted by Tamara Gladstone at 3:39 PM No comments: