I wrote in my last post about a bunch of notable events that happened last Tuesday.  I was full of happiness and anticipation from the very start that day, because I knew that, that evening, I would be going with my mom and daughter (YAY!) to see Melanie Safka (WOW!!) at a local cafe / bar / restaurant called Lovin' Cup.

I have been to Lovin' Cup several times to see my husband play in various bands, and to see other friends' bands play there, too.  The food is delicious, the coffee drinks are great, and it is a smaller venue (maximum capacity of about 225 people) so I knew that we would have a nice meal before the show, and that there would be a great view, and we would not be a mile away from the stage like we would be at a much larger auditorium or theater setting.

But the best, most exciting thing was that I was going to be in close proximity to, and be able to be entertained by, an artist that I have LOOOOOOOOOOOOOVED for literally as long as I can remember.

We didn't have a lot of luxuries or distractions when I was growing up, but we had the great outdoors to explore, and we had music.

My mom played Melanie's records when I was very young, and when I got to be in middle school and junior high I played them over and over, singing to every song at the top of my lungs.  I loved the sound of her voice, the music that accompanied it, and the moody, soulful lyrics which she offered to my angst-ridden heart.
The show was set to start at 8:00pm.  Mom, Ariel, and I went early (6:00pm) in order to get decent seats and to have dinner before the show. We ended up about three rows back from stage right.  Not bad!

We ordered dinner from a delightful waiter with lots of flair on his shirt.

We talked amongst ourselves excitedly.

Then we waited.  It seemed to take FOREVER for 8 o'clock to arrive!

I had not seen any recent photos of Melanie.  I had no idea what she looked like these days.  When she came out and walked to the stage it was a thrill to see her beauty and humor radiating from behind her wild head of (now partially streaked with gray) hair.

A handsome young man came out with her, whom she later introduced as her son, Beau!  He sat in a chair beside her and accompanied her with various stringed instruments that looked mostly like guitars, but were somewhat medieval looking. He played at times with demonic speed, and other times with tender grace.

Melanie stood throughout the performance and played a Rainsong guitar that, at least from a distance, looked exactly like the Rainsong my husband has (minus a few dings).

She immediately started making connections with people in the audience, beginning the set with the song Beautiful People.  Here are a few lines that really struck me, and set the tone for the entire night:

In between songs, she made silly comments and laughed with the crowd as she looked from face to face.  I just sat and reveled in her dusky voice which had grown even more fascinating over the years. I made a conscious effort to allow myself to be fully present in this once in a lifetime experience.  I studied her mannerisms and smile, and the way she interacted with Beau.  He was was quietly sweet, supportive, and loving toward her.  Darling!

At one point she spoke about the death  in 2010 of her beloved husband and producer, Peter Schekeryk.  In so doing, she let us in, further connecting with the intimate group of people in that room.  Her emotion was raw and real.  I could feel her loss... and her healing.

Her storytelling and playfulness with the audience made the evening feel special, magical, as if she were there just to make ME happy!

She played a lot of songs that were newer and which I had never heard before, but I truly enjoyed each one.  It is rare for me to enjoy so many songs by a single artist, especially when so many were completely unfamiliar.

One of the songs, I Tried to Die Young, had me in tears for the entire song:

There where demons, I know them
And they still come by

But we’ve become friends, my demons and I
Now I’m the old girl I never thought I’d become

Does it get any better asks the little girl in my song
I’m still learning the answers so I make up things, you see
She laughs, you’re still the same and you never kill me


My mom yelled out a request for I am Not a Poet, and Melanie obliged:

Towards the end of the evening, Melanie performed a song called Smile.  She had us do some audience participation: singing along with the chorus, which was perfect for this happy, love-one-another tune:

[Said with a snarl, in a snarky French accent, referring to the time she spent in France at the beginning of her career]“I don’t trust the American smile. They smile for nothing.
I think it’s to disarm you or something.”


[Then, in her impersonation of her own young, naive self] "No, I don’t think so. I smile because I want to make some kind of a connection.
I look at someone and I think… we’re connected”
I love people who smile...

I SWEAR she looked right at me when she said those last 2 lines!
I don't go to many concerts (ticket prices are usually too damn high for my frugal proclivities) and when I do, I don't typically want to meet the artist afterward (I am too shy and awkward).  But after all of this feeling connected to Melanie and her music, I was really, really hoping to meet her.
Sadly, my daughter was just too exhausted to stay any longer.  At 10pm, not knowing how much longer the concert would continue, we packed it up and left our excellent seats to some  grateful folks that had been standing for the whole show so far. Fortunately, however, our friend, Matt, was the sound engineer.  My mom gave our ticket stubs to him, which he was able to get signed by Melanie, AND he surprised my mom with an autographed copy of her latest CD!  Thank you so very much, Melanie and MDG! 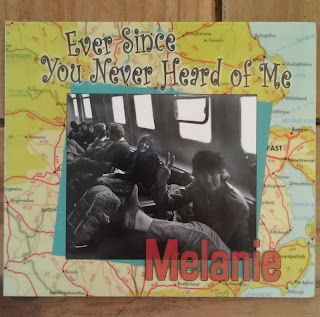 Posted by Tamara Gladstone at 6:58 PM No comments:

A Handful of Scrumptious Firsts.

Last Tuesday was awesome.  As in: I was full of awe, all day long.  I had the house in a pretty good state, considering the amount of fur my dog has been depositing everywhere.  It was a gorgeous day, so I walked around outside for a few minutes to soak in some sun, and then headed down to my basement studio, where I completed...


First #1:  I made my first hand crafted, Coptic stitch bound, watercolor paper art journal.
I followed the directions that Jeanne Oliver includes as part of her "The Journey of Letting Go {creating beauty from ashes}" online art course, which I wrote a bit more about here.

I made the stitches a little too tight, so it didn't want to stay closed all of the way.  I put a stack of big, heavy books on it, and she's right as rain now.  :)

I used the thick backer board from the watercolor paper pad as the cover, and covered it with some cute scrap-booking paper as a base upon which I will embellish, probably with some vintage paper decoupage, a bit of acrylic paint, maybe a found object or two... But I was pretty pumped about having made a book that looks like an actual book!

Every step in the process of making it was thrilling to me:  using my bone folder to make crisp edges on each folded piece of paper; using my new awl to create holes in the paper for stitching through; punching the holes in just the right spots of the front and back covers; waxing embroidery floss for the binding; snugging each stitch as I aligned all of the layers, adjusting as needed.  I love love love using my hands to create useful things.  SO satisfying.

First #2:  I spotted the first baby geese of the season while driving to get my daughter from school.
I get so excited about the progress of Spring:  Longer days, warmer breezes, new leaves and flowers and charming, fuzzy little critters.  Eeep!


First #3:  I went with my mom and daughter to my first Melanie (yes, THAT Melanie) concert!!!

Which I have decided needs it's own post, because it was so dang special!!!

So, tell me:  What have YOU been awe-struck over lately?  Are you more likely to feel awed by something that you made happen, or by something you just happened across?

Posted by Tamara Gladstone at 8:35 PM No comments: